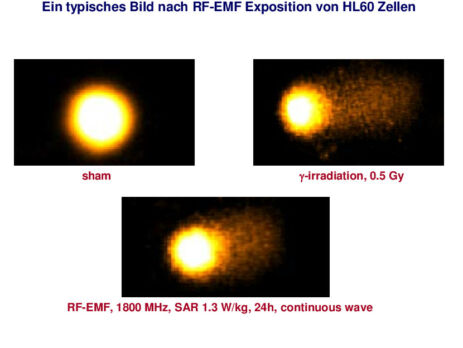 The European REFLEX study (2004) was conducted on behalf of the EU by 12 institutions for a total budget of 3 million euros. The results show that even at a SAR value of 1,3W / kg (representative of many mobile phones) significant biological damage is done in human cells and especially to the DNA.

The key point is that structural research has finally been carried out into the non-thermal effects of 2G (GSM) radiation, 3G (UMTS) radiation and magnetic fields from electrical installations and devices. The effect of the electromagnetic radiation from these sources turns out to be very similar to the effect of X-rays. This is remarkable because many physicists still insist that radio frequency electromagnetic radiation cannot cause damage to the DNA because of its non-ionizing nature.

The EU Reflex study shows that prolonged radiation from a cell phone and magnetic fields can cause genetic damage similar to that caused by radioactive radiation. The Comet Assay test is a highly sensitive assay that can show DNA damage. By means of electrophoresis, DNA fragments are drawn to the outside of a petri dish. The shorter the fragments (more DNA breaks), the longer and clearer the “comet tail” that is visible under the microscope. This demonstrates single- and double-stranded DNA breaks that occur as shown in the featuring image of this post. The top left of the figure shows the control experiment ( ‘sham’ stands for non-exposure), the upper right shows the effect on the cell of 0.5 Gray of X-ray radiation on the cell, the equivalent of 250 years of natural background radiation or about 60 CT scans, and the bottom figure shows the effect on the cell of radiation with the frequency of an ordinary GSM phone (SAR 1.3 W / kg) for 24 hours. Both cases clearly show a comet with a tail.

The Reflex study also shows that there is a relationship with exposure duration, a dose-response relationship.

Meanwhile, this effect on DNA has already been replicated and confirmed in 49 studies. See also Strong Concerns from Scientists. Special edition of Elsevier Pathophysiology.

See also: Almost all of 42 DNA studies in which no effect is found are paid by wireless industry or US Army: Microwave News (2006).

The mechanism of action involved in DNA damage is likely the generation of free radicals (Reactive Oxygen Species, ROS) by electromagnetic radiation. Yakymenko’s review study “Oxidative mechanisms of low intensity radiofrequency radiation” lists 100 studies in which these ROSs are demonstrated in rats, embryos, etc. after exposure to electromagnetic radiation such as from mobile phones and wireless devices.

A clear review article is ‘How susceptible are genes to mobile phone radiation?’ written by the leader of the REFLEX study Prof. Franz Adlkofer, together with Belyaev, Richter et al. (Kompetenz initiative, Brochure 3, 2008, Dld.).

The Reflex Report describes the results of a large-scale EU-funded research conducted by 12 European institutes. In vitro, the effects of exposure of cell cultures to ELF magnetic fields such as electrical installations and devices were studied, non-pulsed RF fields and pulsed RF fields, like from mobile phones and wireless devices. The cell cultures with human and animal cells were placed in petri dishes. As far as human cells are concerned, white blood cells (lymphocytes, monocytes and thymocytes), connective tissue cells (fibroblasts), skin cells (melanocytes), tumor cells (neuroblastoma) and leukemia cells (HL-60) were examined for their sensitivity to electromagnetic radiation.

It was found that pulsed RF fields (GSM 900 and GSM 1800) with SAR values ​​from 0.3 W/kg cause genetic damage, single and double fractures in DNA and MN induction, in human fibroblast cells. In addition, an increase in the number of free oxygen and hydroxyl (OH) radicals was observed. Thermal effects are negligible under this load; The cell culture warming was only 0.01 degree Celsius. For HN-60 cells, no effect of RF load was found at a SAR value of 1.0 W/kg and at 1.3 and 1.6 W/kg a significant increase in the number of DNA fractures and MN induction. At loads between 2.0 and 3.0 W/kg there was an effect but smaller than at 1.3 and 1.6 W/kg. Thus there is a strong non-linear dependency on the load. Exposure of white blood cells to RF fields gave differing results. There was an effect for monocytes, no effect on thymocytes and contradictory results for lymphocytes.

Furthermore it was found that some effects, DNA fractures and MN induction, occurred both for un-pulsed and pulsed RF fields and that other effects, change of gene and protein expression, occurred only with pulsed RF fields. In some cells, an increase in expression of the stress proteins hsp27 and hsp70 was found, indicating a cellular stress response: hsp represents “heat shock protein”.

It has been found that non-thermal load of cell cultures by magnetic ELF fields from electrical installations and devices, or EM RF fields from mobile phones and wireless devices can lead to genetic damage. The damage depends on the type of cell. Some human cells, especially fibroblasts, are sensitive to these fields while other cells, including white blood cells, are less sensitive and do not respond at the low field strengths used in the Reflex study. If there is damage, always an increase in the number of free oxygen radicals, and sometimes also hydroxyl radicals, is observed. These radicals can cause oxidative stress and damage to DNA, proteins and cell membranes, and are likely to be responsible to a large extent for the effects observed. Indeed, in some of the authors’ experiments, when radical scavengers were added to the cell cultures, DNA damage was prevented, a result confirmed by other studies.

Below is a list with reports and scientific publications from REFLEX:

Results of the REFLEX project. Lecture at the 7th Workshop “Electromagnetic Fields in the Environment”; Ministry of the Environment and Nature Conservation, Agriculture and Consumer Protection, Düsseldorf; December 2, 2004

The Reflex study was accused of scientific fraud, especially by industry-related Prof. Alexander Lerchl, professor at a private university in Bremen. See also This is how scientific research into health risks of cell phone radiation is dealt with. In 2010, the allegations turned out to be all false and the Reflex study was cleared of all blame. From 2002 to 2008, Lerchl made a lot of money from the industry co-financed Deutsches Mobilfunk Forschungs program. The IARC Committee of the World Health Organization (WHO) dealing with radiofrequency radiation and cancer, refused Lerchl as a member because of conflicts of interest. When he protested, the IARC explained to him in a spicy letter that his membership would not contribute to a balanced commission because a large part of his work was merely aimed at undermining publications showing health effects.

The unjustly accused lab assistant of the REFLEX Team then sued Prof. Alexander Lerchl for libel and won on all points. In the 2015 judgment of the Hamburg regional court, she was completely vindicated.

According to the leader of the study, Prof. Franz Adlkofer, the Reflex study should have been published a lot earlier, but the telecom companies tried to prevent publication (mirror and CV of Sianette Kwee).

For a critique on the lax position of the Dutch Health Council in this regard, see also page 5 of the article ‘Cancer Mobiles’ from Vrij Nederland.