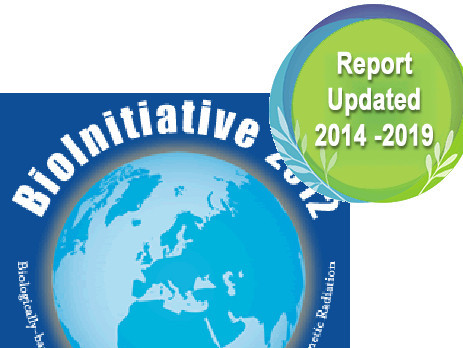 The Bioinitiative Report has been updated over the years 2014-2019. See the updated research summaries below.


This report has been written by 14 (fourteen) scientists, public health and public policy experts to document the scientific evidence on electromagnetic fields. Another dozen outside reviewers have looked at and refined the Report.


The purpose of this report is to assess scientific evidence on health impacts from electromagnetic radiation below current public exposure limits and evaluate what changes in these limits are warranted now to reduce possible public health risks in the future. Not everything is known yet about this subject; but what is clear is that the existing publicsafety standards limiting these radiation levels in nearly every country of the world look to be thousands of times too lenient. Changes are needed. New approaches are needed to educate decision-makers and the public about sources of exposure and to find alternatives that do not pose the same level of possible health risks, while there is still time to make changes. – Page 9 of the Bioinitiative Report, 2007 edition.


The following effects are discussed:

– Effects on genes and proteins

– Effects on the immune system

– Influence of the modulation signal

From the Council of Europe Advice on Health Risks of Electromagnetic Radiation of 6 May 2011 (12608):

21. The representative of the European Environment Agency in Copenhagen, an official advisory body to the European Union, stressed the importance of the precautionary principle written into the European treaties and accordingly pointed to the need for effective preventive measures to protect human health and avoid painful health issues or scandals of the kind already experienced over asbestos, tobacco smoking, lead and PCBs (polychlorobiphenyls), to name but a few. He presented a convincing analysis of the scientific assessment methods currently used and the different levels of evidence to conclude, on the basis of the “Bioinitiative” scientific report and other more recent studies by the Ramazzini Institute in Bologna, that the indices or levels of proof were sufficient at this stage to prompt action by governments and international bodies.

43. These studies are very numerous indeed: the 2007 “Bioinitiative” report analysed over 2000 of them, and more were added by an important monograph published in 2010 by the Ramazzini Institute, the national institute for study and control of cancer and environmental diseases in Bologna, Italy.

48. The rapporteur acknowledges that it is not possible within the compass of this report to analyse and summarise the findings of all these studies. A synopsis of the greater number of them (some 2000) was produced in the “Bioinitiative” report, a report drawn up by 14 scientists of international standing who concurred, regarding mobile telephony and other radio frequencies, as to abnormally high incidence of brain tumours and acoustic neuroma, effects on the nervous system and cerebral functions, and effects on genes, cell stress proteins and the immune system. In this context, it has been observed for instance that radio frequency exposure can cause inflammatory and allergic reactions and impair the immune function even at levels well below the norms of exposure for the public.

21. Is greatly concerned at the Bio-Initiative international report(8) concerning electromagnetic fields, which summarises over 1500 studies on that topic and which points in its conclusions to the health risks posed by emissions from mobile-telephony devices such as mobile telephones, UMTS, Wifi, Wimax and Bluetooth, and also DECT landline telephones;

22. Notes that the limits on exposure to electromagnetic fields which have been set for the general public are obsolete, since they have not been adjusted in the wake of Council Recommendation 1999/519/EC of 12 July 1999 on the limitation of exposure of the general public to electromagnetic fields (0Hz to 30 GHz)(9) , obviously take no account of developments in information and communication technologies, of the recommendations issued by the European Environment Agency or of the stricter emission standards adopted, for example, by Belgium, Italy and Austria, and do not address the issue of vulnerable groups, such as pregnant women, newborn babies and children;

23. Calls, consequently, upon the Council to amend its Recommendation 1999/519/EC in order to take into account the Member States’ best practices and thus to set stricter exposure limits for all equipment which emits electromagnetic waves in the frequencies between 0.1 MHz and 300 GHz;

Many new scientific studies have been published since the 2017 update. As a result, several of the Research Summaries by Dr. Lai are updated in 2019. These are invaluable resources that are searchable by key words. Clearly the trend continues that the great majority of studies report effects of low-intensity exposures to both ELF-EMF and RFR, and a small percentage of published studies report no effects.